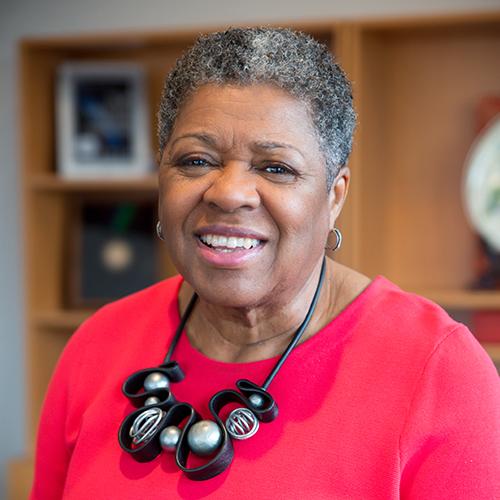 BOSTON (January 21, 2022) – Jackie Jenkins-Scott has been named interim president of Roxbury Community College (RCC) effective February 7, 2022. Jenkins-Scott was approved by Commissioner of Higher Education Carlos Santiago after the RCC Board of Trustees unanimously nominated her in December. Jenkins-Scott brings more than three decades of experience in senior and executive leadership positions in higher education and public health that will serve the College well during the pandemic.

Jenkins-Scott’s extensive experience in Roxbury will allow her to hit the ground running, according to RCC Board of Trustees Chairman Sheriff Steven Tompkins. “Having served as President and CEO of Dimock Health for 21 years, Jenkins-Scott is already an expert on the RCC community. Her existing relationships in the community coupled with her higher education accomplishments ensure that the College will continue its important mission as we search for a permanent president.”

Currently president and founder of JJS Advising, Jenkins-Scott served as President of Wheelock College for 12 years. Under her leadership, Wheelock added new areas of study including cross-disciplinary and online programs; increased undergraduate enrollment by over 50 percent; and grew representation of ethnically and differently-abled students by 40 percent. Jenkins-Scott has served on the board of directors of The Boston Foundation; the Kennedy Library Foundation and Museum; the Boston Plan for Excellence; WGBH; the National Board of Jumpstart; the Council on Social Work Education; Century Bank and Trust Company; and the Tufts Health Plan.

“I look forward to working with the Board of Trustees and the RCC community to continue RCC’s longstanding tradition of providing exceptional education and student support services,” says Jenkins-Scott. “It will be a pleasure to return to working in Roxbury every day and providing RCC’s resilient student community with the education necessary to prepare them for the job market and further academic opportunities.”

Jenkins-Scott will work alongside departing President Valerie Roberson to provide a smooth transition. “I’ve enjoyed working with Jackie Jenkins-Scott throughout my time at RCC,” added Dr. Roberson. “I know she’ll be an exceptional advocate for RCC students. I look forward to our collaboration during the transition and wish her the best in her role as interim president.”

Jenkins-Scott will serve as RCC’s interim president until a permanent successor is appointed. A nationwide search for the permanent president is expected to launch this year.