At Roxbury Community College (RCC) and almost all community colleges in the nation, students must complete a math test during the enrollment process, as a way to verify that students are prepared to take college-level math. Before Spring 2016, many RCC students placed into developmental math courses to learn the fundamentals required for success in college-level math courses.

Upon evaluating developmental course data from Fall 2010 – Fall 2016, the RCC math department determined that the success rates for the developmental classes needed improvement. According to a recent MDRC brief, this is a common problem, nationally, at community colleges: “Community colleges across the country confront a clear challenge: too many students arrive on campus unprepared, get placed into developmental (or remedial) courses where they fail to progress, and never complete a credential, graduate, or transfer to a four-year institution.”

In response to these numbers, the Math Department, under the leadership of Mathematics Department Chair John McColgan, developed a new co-requisite model. In this model, students take the developmental math course during the same semester as the College-level math course. Perhaps most importantly: because students do not earn credits for the developmental component of the course, there is no cost for the developmental component. The co-req model allows RCC students to maximize their financial aid allocations on courses that count towards degree completion. 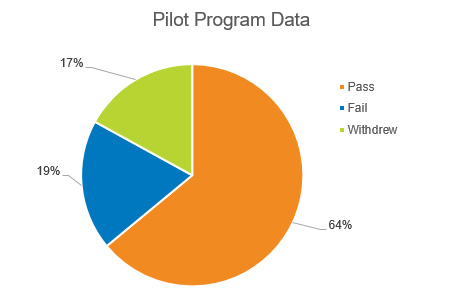 “The preliminary data showed a significant improvement upon all levels of developmental education. This seems to agree with data we have from other institutions in Georgia, Tennessee, West Virginia, and Indiana. Based on this data, the math department at RCC eliminated developmental math classes and replaced them with co-req classes effective as of Summer 2018.” 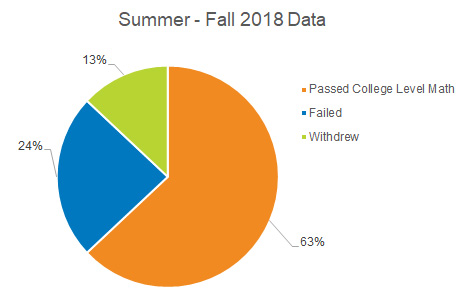 The data from the co-requisite model for Summer 2018 and Fall 2018 is almost identical to the pilot program data: of the 251 students who enrolled, 63% passed college-level math, 24% failed, and 13% withdrew.

“While the initial data is a good starting point, there’s still room for improvement,” says McColgan. “With our students having professional and personal responsibilities that get in the way of finishing a course, we need to explore other models for completion.”

Due to the success of RCC’s co-req math model, McColgan and his colleagues recently led a session on RCC’s co-req math model to a packed house at the 2019 League for Innovation’s Community College’s Innovation Conference in New York City. The success of math co-requisite model is also leading to changes within other departments at RCC. As of Spring 2019, the college has eliminated all developmental science courses; and, the English department is currently exploring implementing a co-requisite model.

Additional Coverage on RCC’s Co-Requisite Math Program:
“Rethinking 'Remedial' Classes: Instead of Helping Students Catch Up, They Hold Them Back,” WBUR
“Higher Ed Board Will Allow Schools To Use GPA To Place Students In College-Level Courses,” WBUR

For more information on co-requisite education at RCC, contact Dean of STEM Hillel Sims at hsmis@rcc.mass.edu or 857-701-1501.